Are You Old Kluang ?
－－Celebration on 100 Anniversaries of Kluang Township
This year, 2010, Kluang is going to celebrate its 100 anniversary township. This means the Kluang town was began and built from 1910. 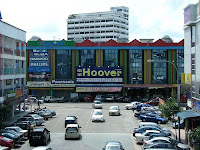 I'm not local in Kluang, but in Paloh new village indeed, which is 60 km far away from Kluang. My family was departed from Paloh in the early years on 1963. The reason we moved to Kluang because of my late father's works. This made me and my beloved siblings became a local Kluang just began from 1963. Since then, we had lived, studied and working here nearly 47 years.

This morning, took breakfast with former colleague, Mr Lee at Restaurant Lao Ba Sa （老巴杀）that means "Old Market" in town area. That is a favorite and well known food court within Kluang town. Not only in the morning, there will be crowd and busy in business till 6.00pm everyday.

When we reached there, we found no seats for us actually. Fortunately, one of my social friend, Mr Ng was there together with his brother from Segamat. They almost finished their breakfast and invited us sat down together with them.

I had ordered a Meehoon Sup（清汤米粉） and a plate of Zhu Chang Fen（猪场粉） for Mr Lee together with two cups of milk tea. While I was discussed closely on one topic to both brother Ng, Mr Lee was surprised on his discovery of some special symbols inside the food court.

He found a very special Chinese Design of Lao Ba Sa and a group of model by a piece of glass accompany with an egg and a roasted bun. Without any waiting, he stood up immediately and recorded those images with his mobile phone camera. It was meant that my friend, Mr Lee had successfully recorded the very historical memories of Kluang town.

As a town in celebration on its 100 anniversaries, it was definitely clear that many other historical stories and places awaiting the public to discover and visit.

If you are a local and one of the Old Kluang , can you please tell me more stories about Kluang?