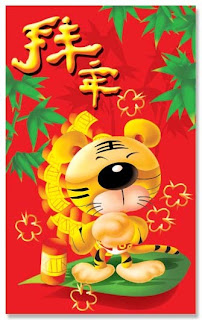 The coming Chinese Lunar New Year is The Tiger Year. This is the proper order following to the 12 Chinese Animals Zodiac Culture.

This traditional culture was created more than three thousands years ago. Follow the folk story of our respected and wisdom Chinese Ancestor, there was once a time, The very Highness Emperor of Heaven call Yu Huang Da Di (玉皇大帝）called a meeting for all the animals in a special occasion, the rat and many other animals were rushing for the meeting happily itself.

In the story, The Highness Emperor had declared that the animal who arrived the meeting place earliest will be elected as the first position among the 12 animals order.

In the very beginning, the smart but deceitful rat was rode on the spine of the honest cow all the way. In the last moment, the rat suddenly jumped over the cow and be the first animal arrived the meeting place. That was the reason why the small rat could be placed on the first position order among the others. In fact, this was a folk story but it had become a favorite story among the Chinese peoples many centuries till today.

The proper order of these12 animals zodiac was : Rat, Cow, Tiger, Rabbit, Dragon, Snake, Horse, Goat, Monkey, Chicken, Dog and Pig. These animals would take turns on every 12 years. For example 2009 was the year of Cow, this 2010 will be the year of Tiger and the following will be the year of Rabbit.

From this humorous story, we had received many meaningful studies because there were many differences, characters and symbols among these 12 animals zodiac culture.

This 12 Chinese Animals Zodiac Culture had been run for thousands years and become a common cultural heritage over the world now a day. Not only the Chinese peoples and societies talking about the 12 animals culture but many other western and eastern countries put more interest towards it. The printing of the animal zodiac stamps following to the order year had been widely accepted in many countries like USA and England etc.

The folk story of these 12 animals also well supported by the peoples over the world. This is why we said that now a day we are living in a globalization villages. The traditional culture from one country or nation had become the common heritage of the world.

By this way, it is our vision that not long from now, the Chinese Lunar New Year will be celebrated by the peoples over the world. I am believing in it firmly and optimistically.